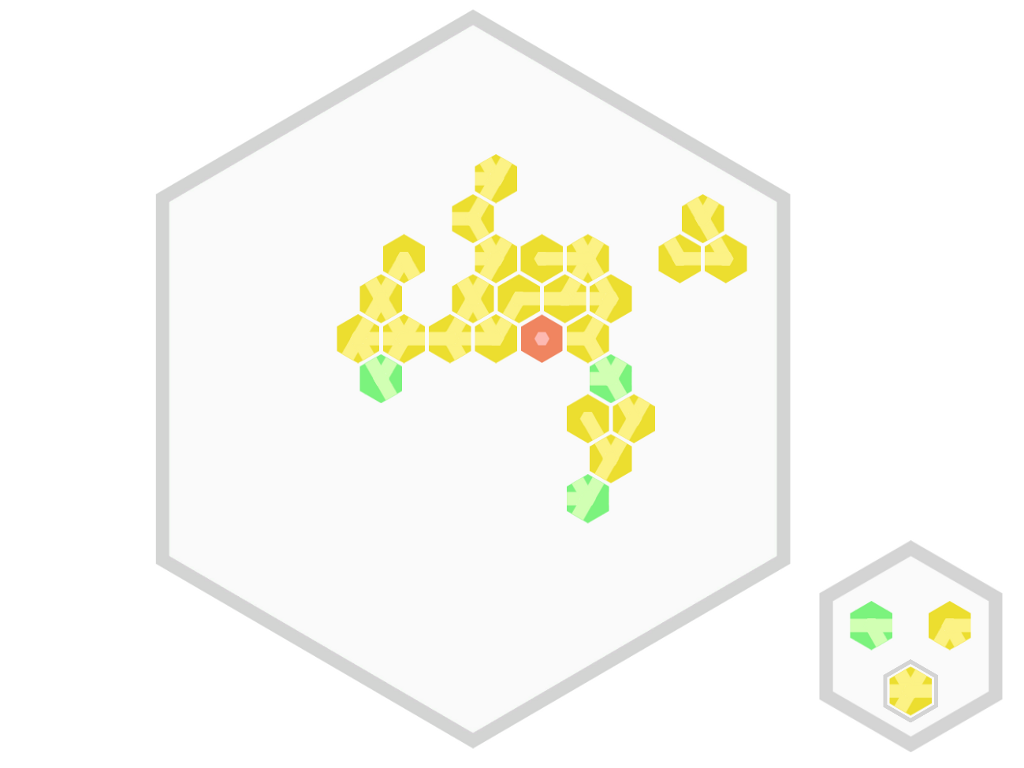 This weekend, there were four game jams going on. As well as old favourite The Arbitrary Game Jam, there was the Epic Game Jam, the 2014 GameDev StackExchange Summer Game Jam, and the first Alpaca Game Jam.

So, like the perfectly sane person that I am, I decided to try to make a single game to enter into all four game jams, fitting into the multitude of esoteric and/or contradictory themes for each. I think I did okay.

TAGJam – Urtication. 1 – The formation of hives. 2 – the sensation of having been stung by nettles.
My initial idea, on reading this theme, was to put together a beehive-building game. After a bit of further research, I found out that the “hives” in the definition are the medical painful type rather than the honey-bee type, but by that point I liked my idea too much.

TAGJam – Assignor. Person who transfers or assigns property. In this game, that’s the second smaller hexagon to the bottom right, which each turn assigns you three pieces each turn to choose from.

TAGJam – Planarian. one of many non-parasitic flatworms of the Turbellaria class. These guys have the ability to grow into two worms if cut in half, and (possibly) the ability to chemically store and transfer memories. Your hives in this game have similar abilities – they can be split in half and carry on perfectly fine, and the “memory” pieces can persist for quite a while apart from any other pieces.

AlpacaGJ – Destruction. The final state of the game, and the thing you’re trying to avoid. The red explosive pieces (and the gradual decay of unconnected pieces) contribute to this.

GDSEJam – Gameplay concept from an existing game, with a twist. The game I had in mind was a game from 1996 called Connectris. Basically, pipes fall down from the top of the screen and you have to join them together. My original plan for this game was to add the twist of “hexagons”, and have the pieces fall down from the top – or possibly all six sides – of the screen. Annoyingly, this “-tris” side of the idea worked much better in my head than on a computer screen.

EpicJam – First Time. Okay, this theme’s stretching things a bit. All I can think of is that the first time you put down a piece, things are nice and relaxed and easy – but as time goes on, more and more explosives appear, and you’re increasingly constrained as to where you can place things. Okay, it doesn’t really fit that well. In my defence, I didn’t even notice that the Epic Game Jam *had* a main theme until quite late on, I thought it was just all the subthemes. Ah well.

EpicJam – Mayonnaise Physics – Planned, but not implemented. I had intended to introduce Mayonnaise pieces that move around the screen, but decided at the last minute that they’d be too silly.

EpicJam – Speed Limit: 0km/h – Everything stays where it is. Nothing moves around. Take that, mayonnaise!

EpicJam – Right part, left part of the brain – Arguably. The constrained logic of matching tiles up, plus the art and creativity of building your hive.

EpicJam – A rare and splendid delicacy – Honey. Well, what did you think this beehive was for?

EpicJam – Grey areas – Literal ones, around the outside of the big hexagon, preventing you from building too far.